The project below is a proof of concept and does not represent the brand in any way.

I was interested in subtitling for a long time, but never had an opportunity to do it. This is why after researching potential subjects for the project on audio and visual localization, I decided that localization of subtitles in my language pair is what I would like to focus on.

To find a suitable video, I watched many winning clips of the International Festival of Creativity Cannes Lions. The winner of the 2019 Grand Prix Outdoor award was a controversial Nike's ad from the "Just Do It" campaign featuring Colin Kaepernick, which I liked a lot not only for its design solution, but as a social statement as well. It was not the first Nike's commercial making such a statement, and as my goal was also to find something challenging enough for subtitles localization, I looked through all of the ads from this campaign and decided upon a commercial released in 2007 named "No Excuses."

This video is a fast, lexically dense and very inspiring monologue of the famous wheelchair basketball player Matt Scott. The challenge of the project was not only in subtitling of a fast monologue, but also in taking into consideration text expansion during English into Russian translation.

My workflow was the following. I started with manually transcribing the video in Microsoft Word, roughly separating the monologue into subtitle-length pieces, and translated it right there. I used a creative approach to translation and tried to convey the meaning of the original text in the shortest possible way. 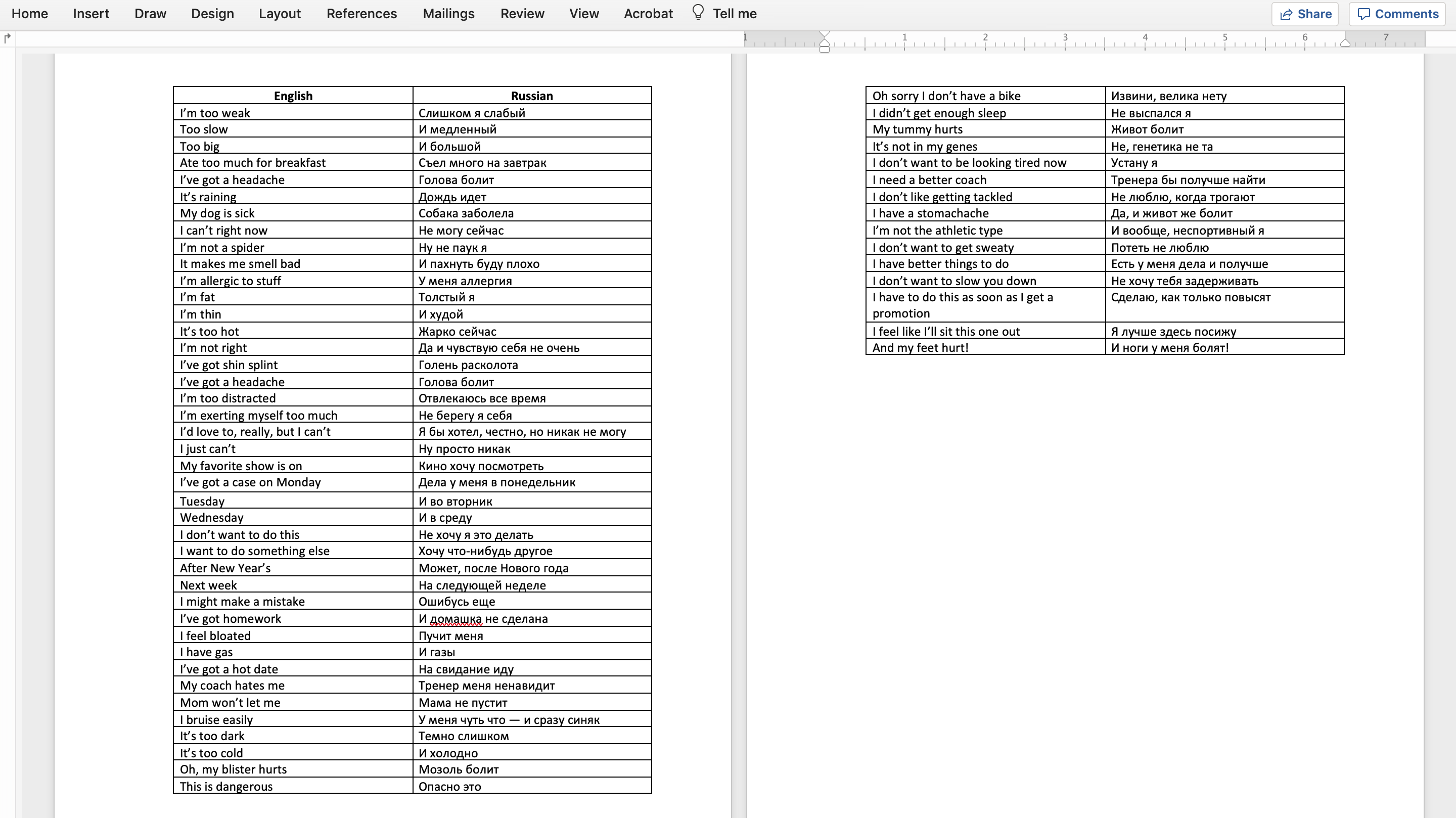 Then it was VisualSubSync Enhanced (VSSE) time. To begin, I set it to match the Netflix subtitling requirements for Russian.

After that I imported the original mp4 video into VSSE and did "spotting" (creation of time-coded subtitles) with simultaneous pasting of the corresponding translations from the Word document. The waveform on the screenshot below shows that there were literally no pauses in the monologue, so the process of spotting was very tedious and time-consuming. 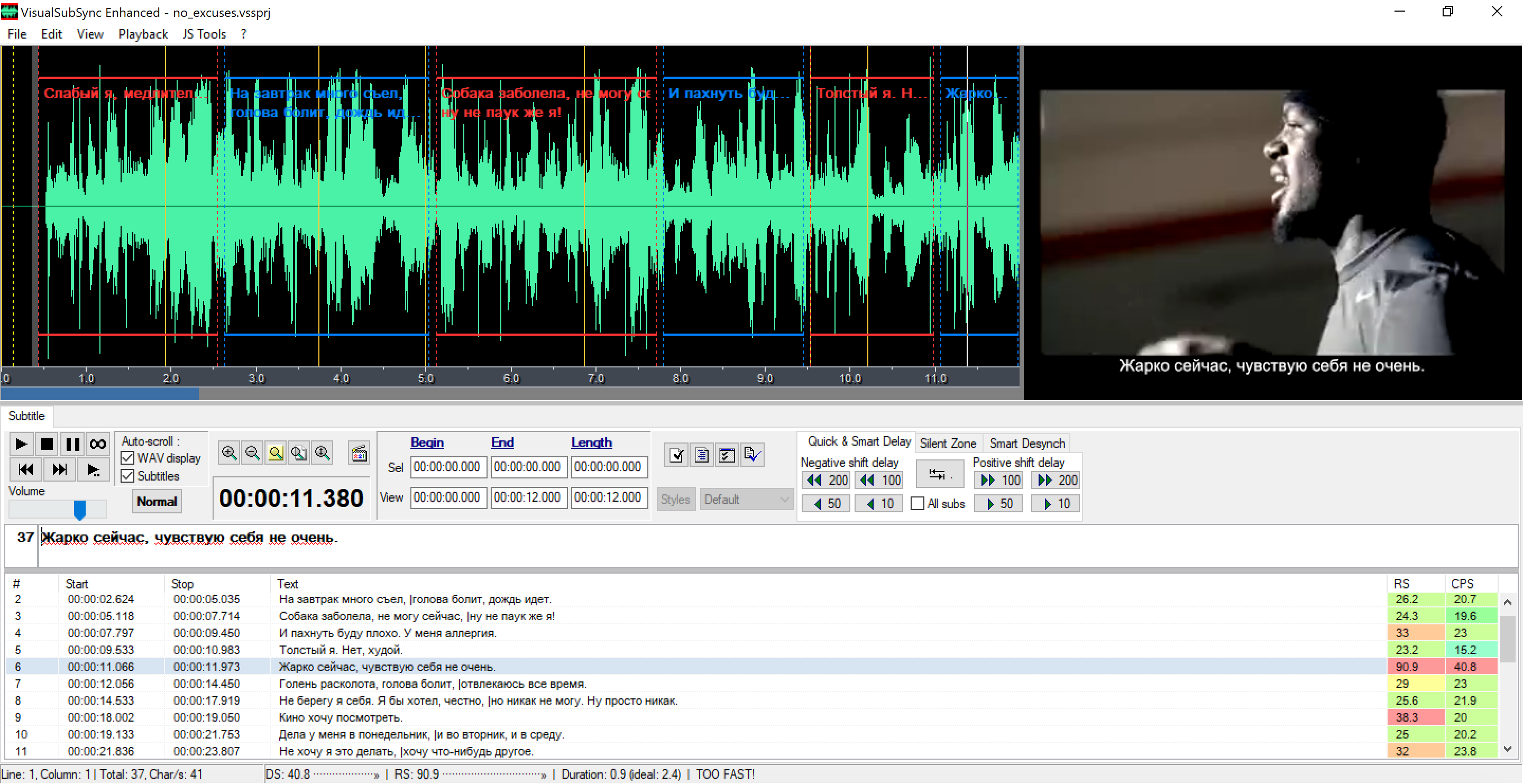 The first pass of quality analysis in VSSE revealed that most of the subtitles were "too fast," that is they appeared on the screen for a too short period of time to be read comfortably. Originally I was trying to follow the Netflix recommendation to avoid subtitles that cross the shot changes, but as it was impossible to combine it with readability, I decided to forego this particular recommendation in order to improve reading experience. Thus during the second iteration of spotting, I combined two to three subtitles into one, occasionally placing them on two lines (recommendations for Russian limit line length to 39 characters). The second round of QA in VSSE gave much better results, so I completed the VSSE part of the project and moved to Adobe Premiere.

After creating a new Premiere project, I imported my assets: the original mp4 video and the srt file produced by VSSE. Then I encountered the second very time-consuming issue, namely adjusting the position of subtitles in such a way that they would fit perfectly into the black bottom bar, without any characters' ascenders or descenders crossing its top or bottom. To do this, I used a two-prong approach. The first step was to decrease the font size and to change the line spacing in the Captions panel to match the bottom box dimensions optimally. It is important to mention that two-lines subtitles imported from VSSE have to be temporarily placed onto one line in Premiere in order for the changes in line spacing settings to make any effect on the text. However, it was still not enough for the proper placement of subtitles, as their vertical position could be changed only to a certain extent there. 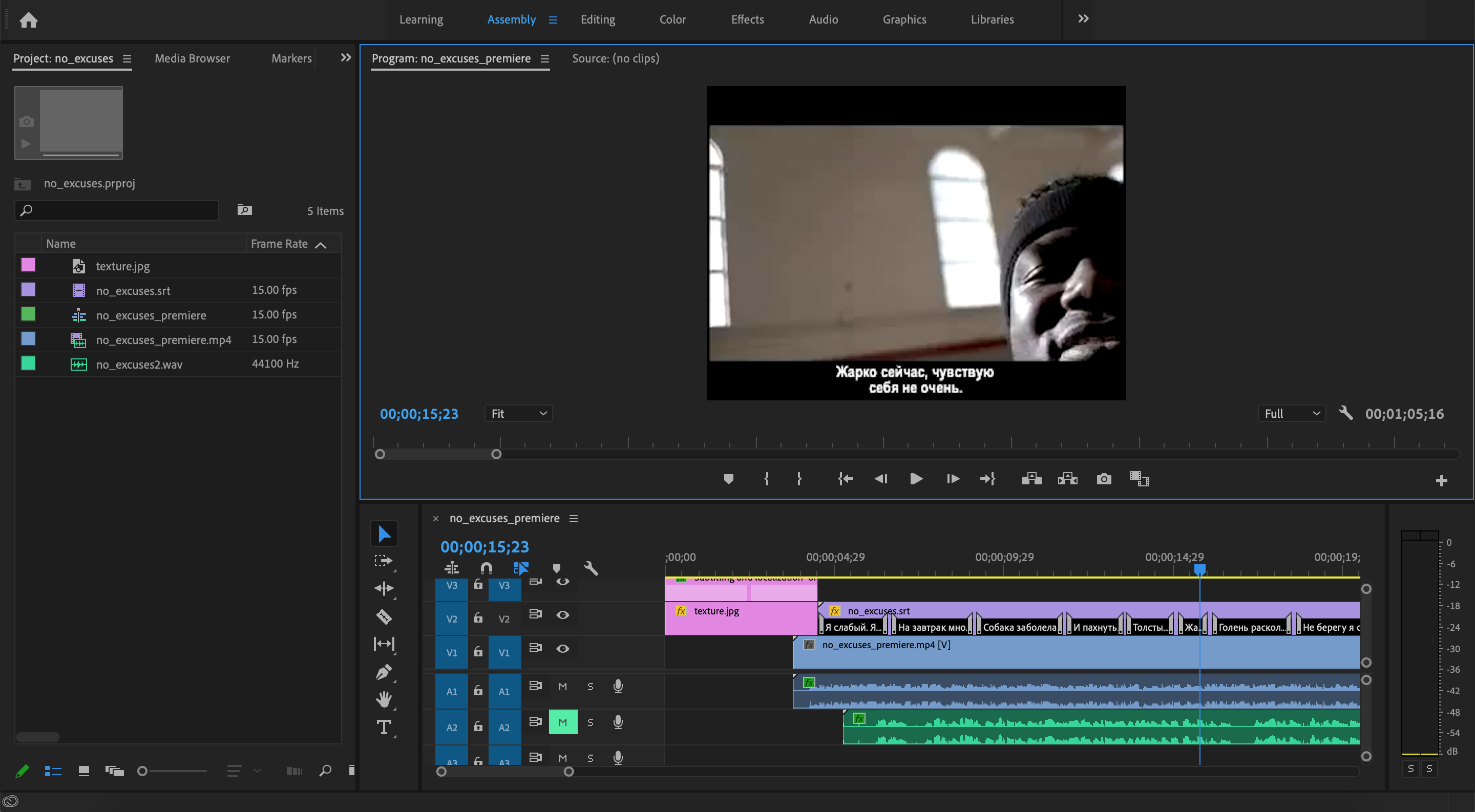 The second step was to move the anchor point within the Motion menu of the Effects Control panel. Here it is possible to fine-tune the position of subtitles until the exact vertical placement is reached. 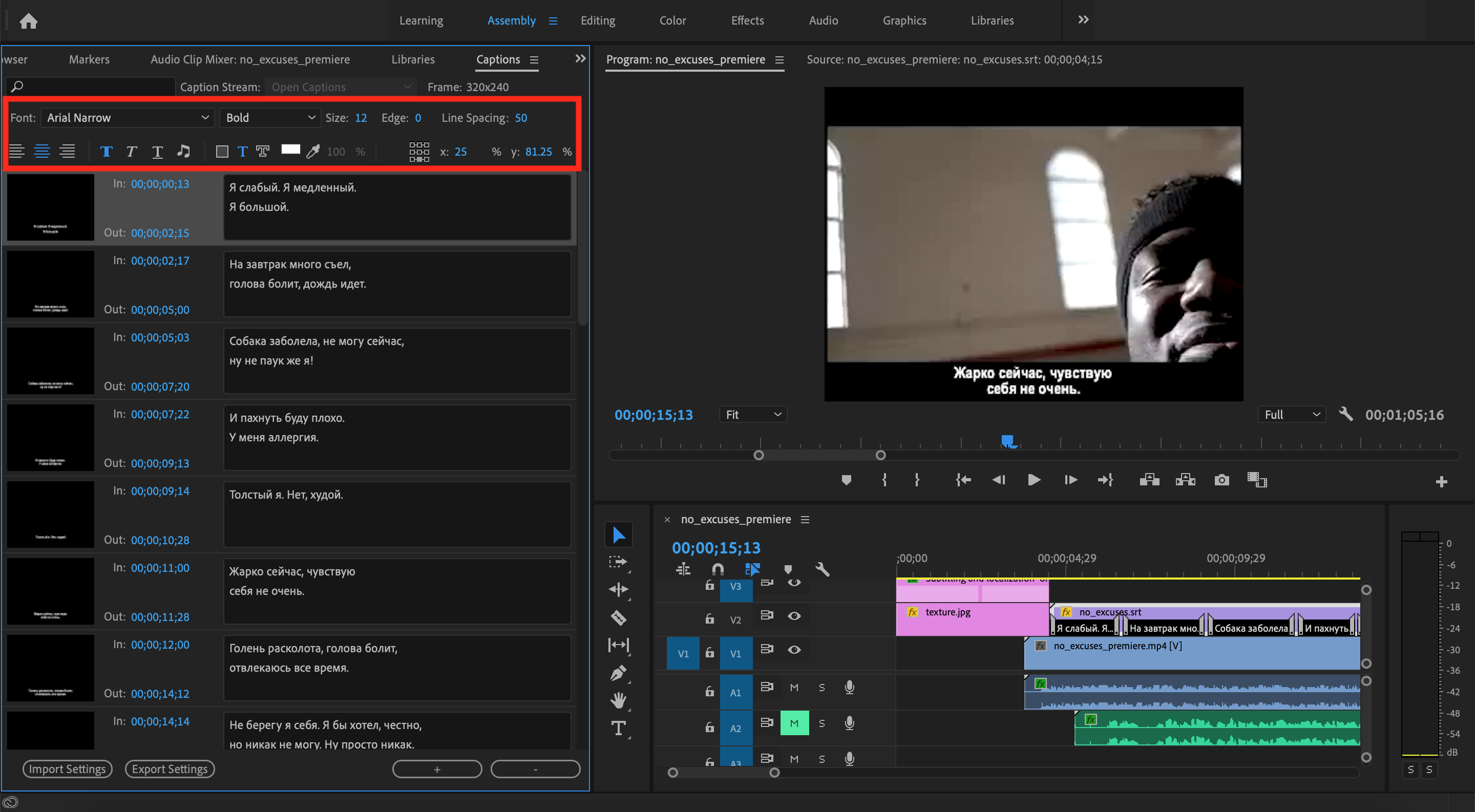 After many rounds of adjustments in both of those panels I finally succeeded in moving the subtitles into the desired position. 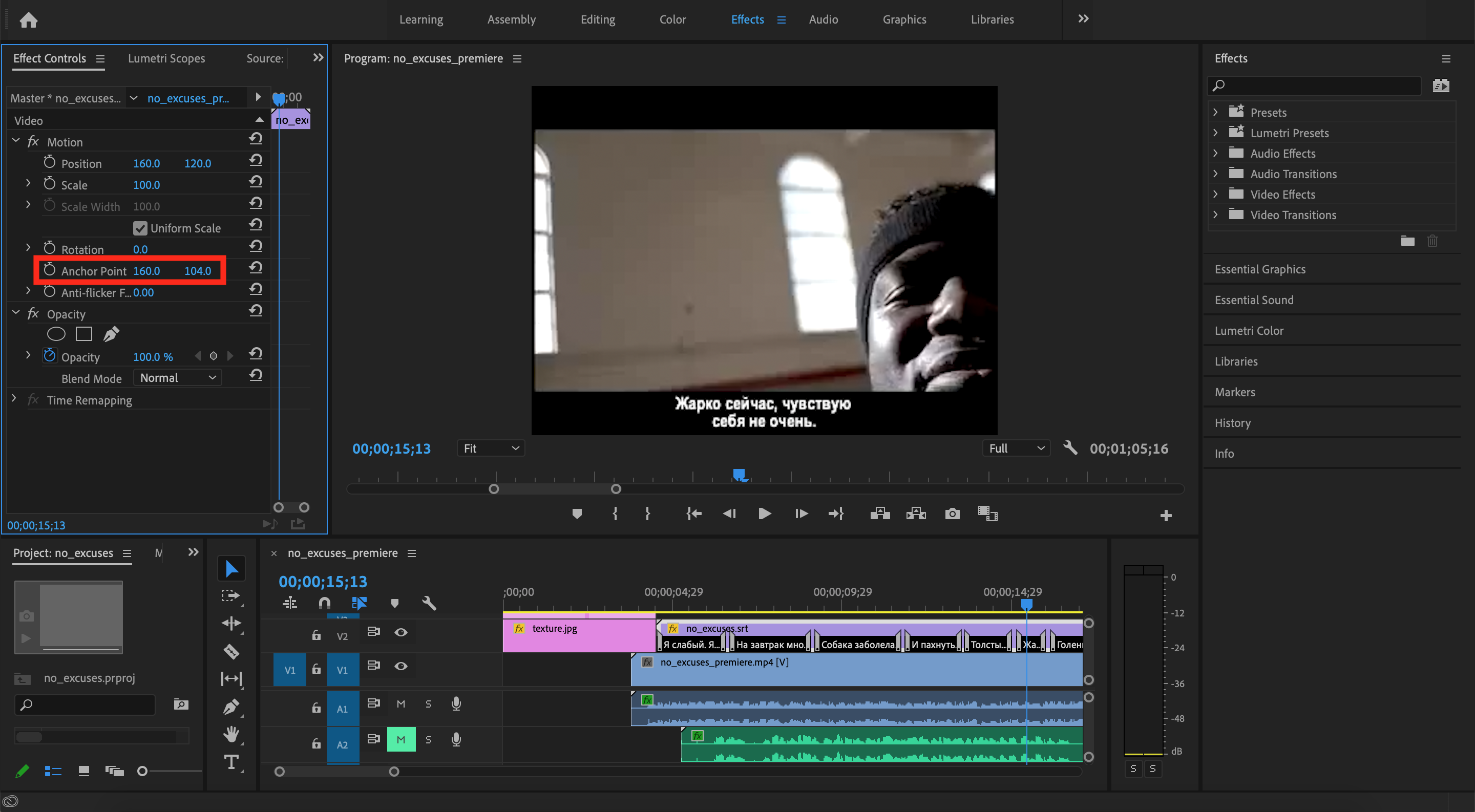 At the final stage of the project, I added the title slide created directly in Premiere and voiceover recorded in Adobe Audition. Let's have a look at the localized videos, both without (top) and with (bottom) voiceover.